When it comes to FDA regulations, vaping has always been somewhere within the gray area. Ever since this trend started to emerge on the market, it has been facing negative response from the public which lead to long-lasting bad reputation and, of course, strict FDA vaping regulations.

In the beginning, the Food and Drug Administration seemed like their one and only mission was to hinder the progress of vaping products or kill off the trend before it even took off.

The good news, however, for all passionate vapers out there, is that the FDA has decided to change and shift their views on e-cigarettes, especially in the recent years, which resulted in them almost completely changing the FDA vaping regulations and tweaking many of their initial statements.

As it turns out, this government agency finally recognizes the vast difference between the act of smoking cigarettes and that of vaping, particularly in terms of their direct influence on the health of a consumer.

As you probably already know, our team here at Smokey News has always been pro-vaping, and in that name, here is a quick history of FDA vaping regulations and rulings throughout the years, along with our take on what these changes should mean for the vaping community.

Back in 2016, the FDA rulings said that its authority was to cover e-liquids and e-cigarettes, meaning the FDA was capable of enforcing regulations on this industry, and any vaping or e-cig product that had been released on the market after February 15, 2007, was treated exactly like regular tobacco cigarettes, falling under the notoriously lengthy, convoluted, and quite expensive FDA approval process. 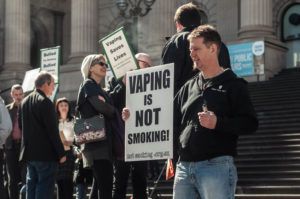 Of course, this emerged as a rather substantial problem as the majority of vaping products are manufactured by independent vaping companies, which cannot (like huge multi-billion dollar companies) easily fund the FDA approval process in such short period of time. Research showed that these deadlines were the number one reason for shutting down most small vaping businesses.

This basically put vaping and e-cigs in the same category as regular tobacco, which naturally gave the vaping community a valid reason to be outraged since that directly implied that vaping is just as dangerous to one’s health as smoking tobacco — and this is simply untrue.

This resulted in various scientific researches, and eventually lead to proving that vaping products are considerably safer than the consumption of traditional tobacco.

In fact, according to an article published by Reuters in 2015: “Electronic cigarettes are around 95 percent less harmful than tobacco and should be promoted as a tool to help smokers quit.”

In 2017, the FDA informed us about the adjustments to their original ruling that would encompass prolonging the deadline for all the necessary approval applications. The deadline for submitting all the papers is now August 8, 2022, a date that is much more plausible for smaller independent companies.

Scott Gottlieb, the head of the FDA, saw this as a positive shift, and said that “envisioning a world where cigarettes would no longer create or sustain addiction, and where adults who still need or want nicotine, could get it from alternative and less harmful sources, needs to be the cornerstone of our efforts.”

This came as a sigh of relief for the vaping community as FDA now recognizes vaping as a much less hazardous alternative to smoking regular tobacco.

We at Smokey News cigar shop are feeling quite positive about the future of vaping, and all vaping and e-cig products, that are truly an innovative alternative to traditional cigarettes.