Artists and Entrepreneurs Cash In on the Vape Industry

A mutually beneficial relationship between vape companies and artists is changing the industry. And it got its start in Colorado.

Colorado Springs-based 7th Floor Vapes was one of the first herbal vaporizer manufacturers to impress eye-catching works of art on its devices, making vaporization not just a habit, but an experience. Today its monolithic Silver Surfer and Super Surfer desktop vaporizers come in a variety of psychedelic looks, each dreamed up in-house or by outside artists and bands. Some, like Alex Grey’s paintings, are psychotropic; others are hazy, dream-like portraits of nature.

Seeing room for improvement, 7th Floor experimented with using a dye-sublimation printer, which permanently affixes ink drawings onto hard surfaces. After a few years and several pounds of wasted prints, the vape company finally mastered the art of sublimation printing.

The process is insanely meticulous. First Robbins creates the designs on paper, sometimes drawing from her experiences camping in the mountains, sometimes from ideas suggested by Steve Kelnhofer, 7th Floor’s owner. The company also collaborates with artists and bands, and allows consumers to submit their own artwork for custom jobs.

Scanning the chosen artwork onto her computer, Robbins adds digital flourishes and multiple layers using Photoshop. The design is then printed onto heat-transfer paper using sublimation ink. The paper is tightly wrapped around the cylindrical housing of the vaporizer, which is coated with a special powder that promotes the ink’s absorption into the surface. The piece is then baked in an oven, where art and vaping melt into one.

In her designs, Robbins perfectly aligns the image with the control knob of the vape, taking care not to leave a gap or overlap in the bleed area where the image meets in the back. If a vaporizer comes out of the oven with a single blemish, the unit won’t leave 7th Floor’s warehouse.

Robbins believes 7th Floor’s intense attention to detail adds quality that’s palpable to users. Ultimately, the idea is to charm the eye with mind-bending imagery that complements the experience of getting stoned.

“I am personally convinced that having something artistic to stare at is worlds better than having a TV on in the background,” says Robbins. “I add as much depth and detail as possible to my pieces so that once you’ve reached that vaped-up head space, you can get lost in finding the subtleties.”

Now other companies are following 7th Floor’s lead, as more artists and musicians team with larger manufacturers on vapes that bear their prints, likenesses and even jingles.

The reason for this micro-renaissance within the vape business is equal parts creative and commercial. As vaping grows into a multibillion-dollar industry — an estimated $32 billion by 2021 — the vaporizer has become an unlikely canvas for artists. And for manufacturers, it’s a way to attract new consumer segments with uniquely designed products.

A number of mainstream vaporizer companies like KandyPens, Grenco Science and Pax Labs have joined with artists to release limited-edition versions of already existing vaporizers.

Some of these collaborations are purely profit-oriented. Singer the Weeknd teamed with Pax Labs on an underwhelming, discontinued version of its former flagship vaporizer, the Pax 2, back in 2015. Consumers paid an extra $45 to hear the pop star’s hit “The Hills” play when drawing from what was essentially the same device as the original Pax 2.

More recently, Santa Barbara-based KandyPens, a maker of pen-style vaporizers for on-the-go use, launched its own artist partnership program that includes rappers A$AP Rocky and Young Thug. The program elects famous musicians as brand ambassadors, who in turn give KandyPens product placement in their videos.

Other collaborations are more inspired.

Grenco Science later repurposed Frost’s artwork as the design for the Phil Frost x Burton G Pen Elite. Launched earlier this year, the vape shares a bit of Grenco Science’s spotlight with Frost while offering an invigorating makeover of the original G Pen Elite, which has a sleek black exterior that slightly resembles a beard trimmer.

Vape companies are making an effort to feed into the symbol-hungry audiences of countercultural artists such as Frost. Like 7th Floor Vapes, they’re using artistically charged designs to make vaping a more meaningful experience; they’re also targeting new consumers seeking that kind of trip. As Andy Warhol put it, “Good business is the best art.”

With these creative vaporizers, the artist, manufacturer and consumer all stand to profit. 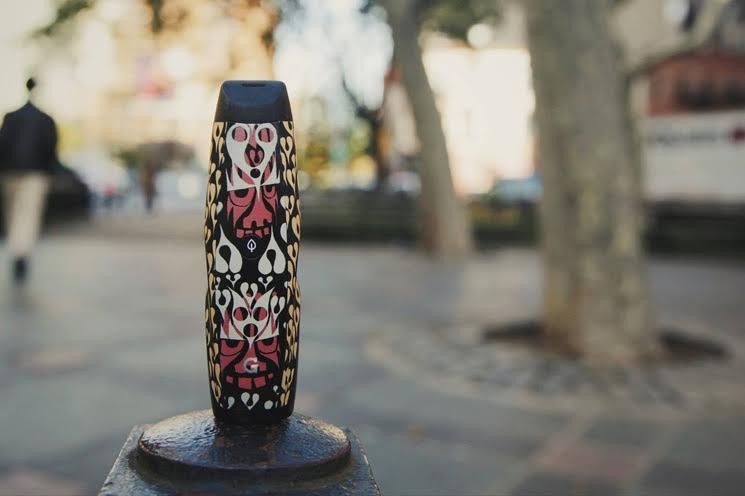