What to Look for in a Good Hookah Shop

It’s Friday night, and you’re about to have some quality time with your friends. Tonight, you have something special planned out: you take out the dusty oblong box from underneath your box, construct a three-feet long shisha and light up your favorite cherry-flavored tobacco. You inhale…

Today, shisha is one of the most popular and socially acceptable forms of tobacco use. While chewing tobacco has been out of the everyday drug scene for a long time now, traditional cigarettes and rolled tobacco are being rejected by a larger part of the Western society every year. If some fifty years ago cigarettes were marketed with implied health benefits and were used by pretty much everyone, today cigarette smoking is seen for what it truly is – an addictive, antisocial and harmful activity.

Hence the increasing popularity in shishas. Unlike other tobacco products, hookahs aren’t directly associated with addictions or nicotine craving; a contrary is true – shishas today are still a prestigious form of relaxation and self-indulgence, just like they when they first became popular.

Popular in most expensive lounges and clubs, shishas are also the most social way to enjoy tobacco. In fact, some cultural groups find themselves using shishas in most of their social gatherings and claim that hookahs are an essential part of their social culture.

However, social acceptability isn’t the only reason for the popularity of the smoking method. Some people simply choose shishas as alternatives to cigarettes – these people smoke hookah on regular days (as opposed to social meetups) and use it to relieve stress. Perhaps they prefer the whole ritual: smoking shisha is a long, somewhat meditative exercise if done alone.

For all we know, hookahs are awesome. Whether used in solitude or with friends, smoking hookah brings us that unique feeling of peace and calmness. The cooled smoke is relaxing and pleasant to inhale, and, unlike cigarettes, hookah sessions create the perfect atmosphere for self-reflection.

Quick History Behind Hookahs: From Ancient to Modern Times

The origins of hookah are mysterious, as if the cold, dense layer of hookah’s smoke would overshadow its past. While some sources claim that originally the idea of a hookah was born to a physician in India in 16th century, others believe that it was Persians who initially started using waterpipes for pleasure, and that the idea spread to India and other regions from there.

One thing is consistent, though: all evidence supports the fact that first shishas were used in 16th century; namely, no documents indicate occurrences of hookahs before 1560 anywhere in the world.
Giving birth to a popular 21st century myth about hookahs, the smoking apparatus was initially created as a “healthier” smoking option: after Persia and India have been introduced to European tobacco, health concerns were quickly raised and passing smoke through cold water was thought of as a purifying process. Hakim Gilani, a physician in the Mughal court, was the author of the “healthy smoking” idea and the creator of the first hookah. He conveniently introduced his invention right after the Indian emperor and role-model Akbar I started smoking tobacco himself, thus hookah quickly became popular among noblemen as a means of relaxation and even a symbol of status.
The usage and construction of hookah haven’t changed significantly since then, despite the increase in popularity. While some variations are consistent among different regions, hookahs are pretty much the same anywhere in the world. One thing to keep in mind though that hookahs have many different names across the cultures – don’t be surprised if the words ‘hookah’ or ‘shisha’ don’t ring a bell right away when traveling abroad.

There is an ongoing debate whether single hose or multiple hose shishas are better. The truth is that there is no “best” type of hookahs and it purely depends on your preferences.
The first thing you’d need to consider is whether you’d mostly be smoking alone or with a group of friends. If you’re planning to mostly use the hookah alone and only rarely invite others to join you, there’s little reason for you to buy a multiple hose hookah.

Why? Firstly, hookahs with 2+ hoses are usually more expensive (more difficult construction of the vase, additional pipes), so if you’re not going to use more than one pipe simultaneously, you should definitely consider whether it’s worth the investment.
Secondly, additional pipes can only make things worse in terms of smoking experience: while the best multiple hose hookahs are unlikely to sacrifice the smoking pleasure, the cheaper versions can have poor construction, leaving you and your friends constantly fighting for a smoke. With cheap multiple hose hookahs that have poor smoke distribution, the option you’d go for is to cover all hose mouth pieces except one (the one that’s being inhaled through), essentially making it a single-hose pipe.

However, even if you’ll find yourself smoking shisha with others often, you’d need to consider whether you prefer the convenience of multiple hoses or the sharing element of having just one. With a single hose hookah, the people involved will quickly take puffs and pass the hose on, staying open for conversation until their turn comes again (as opposed to four people each steaming on their pipes constantly). Again, no unambiguous answer – it’s up to what you and your friends prefer.

While extra tall hookahs might be super attractive appearance-wise and really become a main accent of a party, the length itself doesn’t really impact how well a hookah smokes.
There are two main aspects of hookah usage that are impacted directly by its measurements:

Remember, it’s the base of the hookah that matters, not its length. Best hookahs will have a large enough water base to keep it stable and cool off the smoke properly. 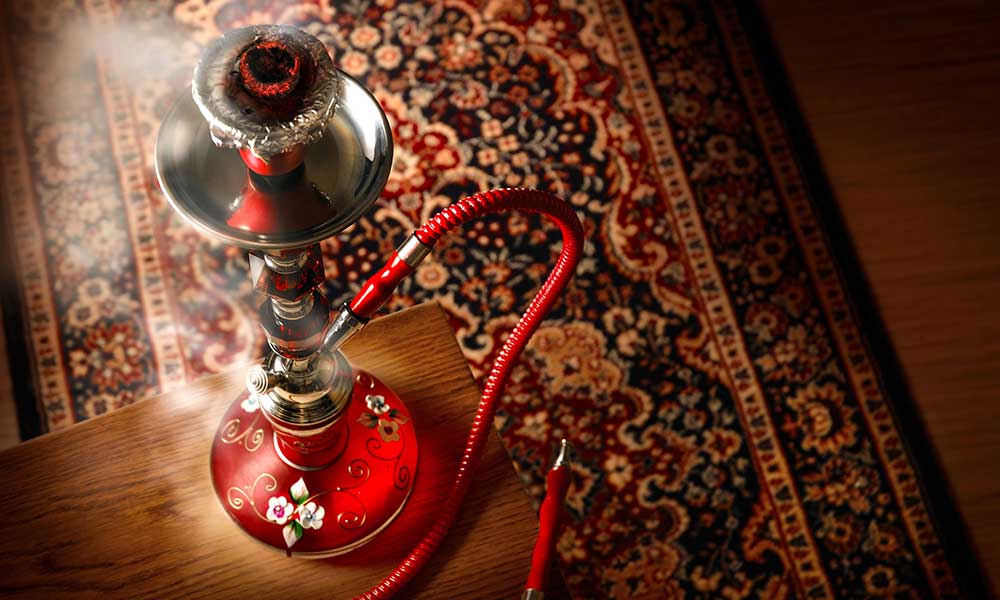 While all hookah manufacturers generally try to replicate the original Persian proportions (large water base, tall, slim neck, coal burning on top, pipes coming out of the main chamber), some of the designs displayed today could be easily mistaken for art and not consumer products. Here are some of the most interesting styles among today’s hookah selections:

So, you’ve set-up your hookah, had a test run and everything went perfectly. Congratulations – you’ve done half of the job. The other half will consist of maintaining your hookah clean and in good shape, if you’re planning to use it in the future, that is.

Here are some of the main tools/replaceable parts that go into keeping your hookah brand new:

How to Set-Up a Hookah

If it’s your first time setting up a hookah or you simply haven’t practiced for a long time, be prepared to make a mistake or two. While it would be best to have someone experienced with hookahs by your side, you can definitely learn how to connect the hookah pieces by yourself, just follow these steps thoroughly:

How to Clean Your Shisha

Cleaning shishas isn’t rocket science and it’s really not that different from washing dishes. However, there are a few tips and tricks to the hookah cleaning.

Firstly, never clean your shisha right after a smoking session. Some of the metal/glass parts close to the burning coal can get extremely hot, leaving you vulnerable to being burnt. Since you’ll be needing to disassemble the shisha with your bare hands, you should definitely let it cool off for some time.
Once all of the hookah’s parts reach room temperature, carefully remove the ashtray (just make sure you’re not in a windy room when doing this). A good way to get rid of ash is to pour water on top of it and only then getting rid of the mix.
As mentioned previously, you want to separate all of the shisha’s parts so you can properly wash each one of them.
A couple of common household products that’ll help you clean the loose pieces of tobacco and other toxic leftovers from the inner side of the walls (this applies to both the stem and the base) are lemon juice and baking soda. Lemon juice should be enough in most cases; use baking soda only in severe cases.
To get to every part of the stem (and this is especially relevant to the owners of tall shishas), you should use the long narrow brushes shown in the accessories’ section. Or, if you don’t have those, you can simply use an old toothbrush – should be long enough to clean the whole stem.

Electronic tobacco products are preferred over traditional ones for most various reasons. While some of us buy the e-shisha producers’ claims that electronic alternatives are healthier and less addictive (and thus are the perfect solution to regular tobacco smokers who’re concerned about their health), others simply buy e-hookahs in an attempt to follow the trends and/or to try something new.

However, if you’re considering switching to electronic shisha products, you should know a few things first.
For starters, drop the myth that e-hookahs are less dangerous to your health than regular tobacco reliant methods. While electronic shishas don’t emit any tobacco fumes, they present other concerns; in multiple studies of e-shisha cartridges, health experts have found toxic, cancer-inducing ingredients – some of which can also be found in antifreeze.

It’s almost impossible to tell without proper inspection what’s in each e-hookah “bullet”, since they rarely come with detailed labels. That being said, cases were examined when nicotine was found in e-hookah pens that said “nicotine-free”.

Why would you buy a hookah e-pen then? For one, you can smoke electronic tobacco products in public places, where regular tobacco products are restricted. Whether you’ll enjoy the judging looks of others is up to you.
E-hookahs don’t require any time to set-up and are really convenient to use. However, isn’t the whole process of setting-up a hookah a big part of the ritual?

By now, you should have a pretty good idea of everything you’d need to know about hookahs, and the only thing left for you to do is to… Choose the flavor!
Now, of course, there isn’t a best type of shisha flavor out there, despite what the tobacco salesmen will tell you. However, some manufacturers do seem to capture the subtle taste preferences of their customers better than others. Let’s take a look at some of the most popular hookah flavor selections available: