Hookah VS Vaping – Know the Difference

We at Smokey News enjoy both of these activities equally, but since we realized that some people can’t really tell these two apart, we decided to delve a little deeper into the differences, but also the similarities between hookah and vaping.

The nutshell would be the following: hookah involves smoking shisha tobacco via a hookah pipe, while the process of vaping involves using an electronic device to inhale e-liquid. It does sound pretty simple, but is it? Let’s go over the main similarities and differences between the two and end the hookah VS vape debate once and for all.

Hookah VS Vape – The Similarities

Although hookah and vaping are obviously two rather different activities, they DO have certain things in common:

Hookah VS Vape – The Differences

NOTE: Tobacco-free shishas can also be found, but not that many people consume this alternative.

As far as vaping is concerned, most e-liquids are a mix of the following: propylene glycol, VG, diluted liquid nicotine, and various flavor concentrates. The range of e-liquid flavors is also quite wide and similar to shisha, while you can also choose various levels of nicotine, propylene glycol, and vegetable glycerin.

If you’re new to vaping, we suggest you experiment until you find your perfect blend. 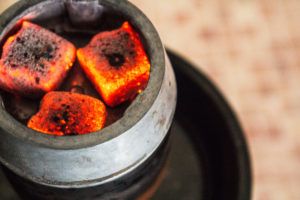 Hookah produces smoke by heating shisha tobacco via burning high-quality charcoal that is typically made from coconut shells. There are also mid-level and low-level (quick-lite) charcoals available. The former is made from wood, while the latter is made from… well, you better steer clear of these, to be perfectly honest.

When it comes to the very process of burning charcoal, it can take a few attempts to get it just right. The basic “Goldilocks” rule is that you shouldn’t get it too hot (which can quite severely limit the life-span of the charcoal), and you do not want to burn it too lightly (which can lead to problems with maintaining the flame). The main equation for adjusting the heat level is: use more coal for more heat; use less coal if you need less heat. 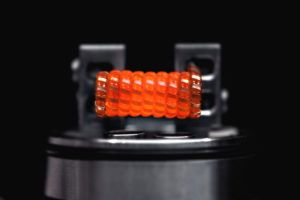 they use atomizers to heat up e-liquid inside them. Atomizers are battery powered components that typically have a coil that is wrapped around organic cotton. You use e-liquid to soak up the cotton part, and once the heat is applied, the liquid turns to vapor.

You don’t have to worry about heat adjustment when it comes to modern vaping devices as this process is usually done automatically. This auto-adjusting heat is measured in watts or volts and is usually done internally. You can also find unregulated vaping devices that don’t feature this automatic temperature control, but these use ohm-resistance of an atomizer coil to regulate temperature.

So there you go folks, main hookah VS vape device differences. Hopefully, things are a bit clearer now.

Let us remind you that we at Smokey News offer quality vaping and hookah equipment, as well as e-liquids in Fort Lauderdale, herbs, glass pipes, tobacco, cigars, and other smoking and vaping accessories. Do check us out!