7 Most Expensive and Beautiful Glass Pipes Ever

If you love glass pipes as much as our team here at Smokey News, then you are in for some delicious and mesmerizingly gorgeous classy and glassy treats. Although most pipers don’t really go over 100 bucks when purchasing their new rig, there are some hardcore players who are able to spend even 7 figures worth of dollars on these bad boys. We are all more than curious what else is out there in the colorful and fragile world of glass pipes.

This is why our Smokey News team decided to dig a bit deeper into this colorful, intricate, ethereal and rather fragile realm of most expensive glass pipes in the world and provide you with a list of 7 most pricey ones. 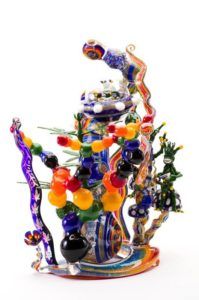 Take Me 2 The Mothership by Scott Deppe

Deppe is one of the craftiest dudes out there when it comes to creating bongs. “Take me 2 the Mothership” is among his most wanted ones. To say that this glass pipe is intricate and out of this world is truly an understatement.

We would really love to be able to enter Scott’s brain somehow, just to see what the hack goes on in there…

What happens when some of craziest glass artists out there join forces to create a glass pipe? Illuzion Glass Galleries annual 420 party piece is what happens. This dashing and bold collaboration by Darby, AKM, and Cowboy is 11 inches (30 cm) tall and is adorned with a little bit of magic from each of the artists mentioned above. 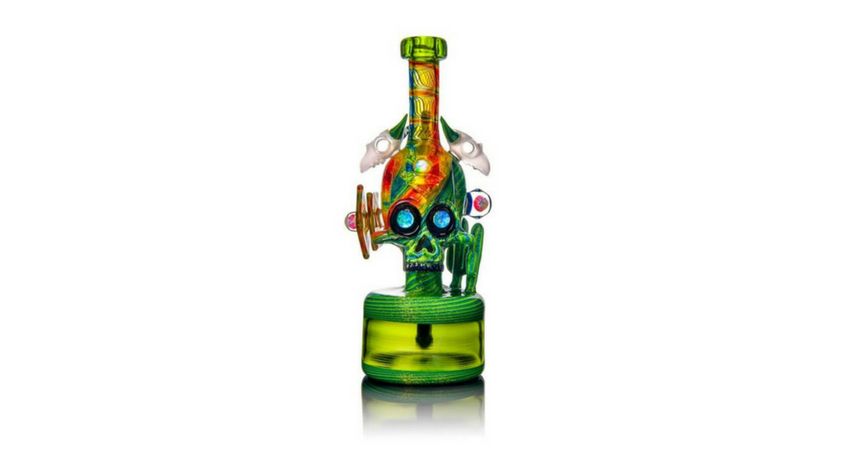 As you probably already guessed, this piece was inspired by the famous “Double Rainbow” video that went viral back in 2010. This huge collaboration happened the same year and took place at the 2010 Colorado Project when Adam G., Darby, Buck, 2BA, and Eusheen joined forces to make this amazing two-pipes-in-one bong.

Arrr you ready for some serious sailing? We sure hope you are because this amazingly intricate bubbler shaped like a breath-taking pirate ship can be yours for only $30,000!

This is where the bets go really high (no pun intended). This Roor piece looks like it just came straight out of a B-production horror movie. Sweeeeet.

Another true beast among the most expensive glass pipes and another amazing creation by Scott Deppe, Gold Encrusted Skull Bong is one of the most beautiful things we at Smokey News have ever seen. It looks like the most expensive and most valuable secret artifact item from an Elder Scrolls game. Deppe really pushed the envelope on this one, so no wonder it costs 1 hundred grand.

“The Throne” by Clinton Roman, Deppe, Darby Holm, and Banjo 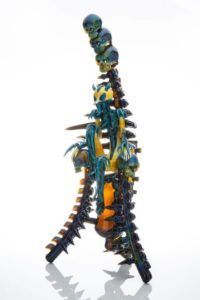 Not “one of” the most expensive glass pipes currently in the world, but quite likely THE most expensive one is definitely the piece called “The Throne.” This behemoth stands two feet (60 cm) tall and was constructed 8 years ago.

Deppe was the main man behind the skulls, while the structure itself was put together by Darby Holm using the Deppe’s Darkness color. Banjo was in charge of the delicately hair-raising blue and yellow goddess that sits upon the throne made of bones.

“The Throne” can be seen at Illuzion Glass Galleries in Denver.

So, there you have it my fellow glass pipe lovers, 7 most expensive glass pipes in the world. Which one is your favorite? Feel free to mention it in the comments section. For more articles like this one, and some great deals on pipes and other smoking and vaping equipment in Fort Lauderdale, visit Smokey News!