It’s safe to say that vaping has taken over the smoking culture and has established itself as more than just a fad. More and more people are dumping conventional cigarettes and picking up their atomizers instead.

While most are making the switch due to convenience and the benefits over smoking, some individuals are picking up vaping for an entirely different reason. These vaping enthusiasts are all about their cloud chasing, hence why they are called cloud chasers. But what is this cloud chasing vape activity?

Well, that’s exactly what we’re going to talk about in this article, so read along to find out all the juicy details.

How did it all start?

As vaping gained momentum and rose in popularity, cloud chasing was the natural next step, and it took off when vapers started upgrading their vaping rigs and tweaking them so they would produce more smoke. The exact origin of cloud chasing is somewhat of a mystery, however, many people believe it all started on the West Coast. At least the competitive part of it. Yes, you read that right, cloud chasing is considered a competitive sport, but we’ll get into that a bit later.

Cloud chasing is also called sub-ohm vaping due to the fact that most vapers who are looking to get into cloud chasing start out with a sub-ohm tank build. Other notable names for this activity are extreme vaping and more recently stunt vaping. Today cloud chasers are the face of the entire vaping movement and are the number one thing non-smokers associate to vaping.

How to Chuck Clouds

So you’ve decided you want to dive into cloud chasing and produce those juicy and thick vapor plumes. Here are some tips and safety precautions to consider before modifying your tank:

Be cautious of what batteries you use

We can not stress enough on how important battery safety is. There have been numerous reports of unexpected explosions due to batteries not being suitable for high-performance vaping. Always consult more experienced vapers or the staff at your local smoke shop what batteries are the safest. We recommend brands such as Panasonic, Samsung, LG, and especially the Sony VTC4/VTC5.

Enormous clouds are all about finding the right balance between resistance and airflow. The lower the resistance, the more air is required. This is something you’ll need to figure out on your own as you have to factor in a lot of other things as well. Just remember that too much air can disperse the vapor, while too little might produce underwhelming results.

There’s a significant difference between VG and PG e-liquids. VG is known for producing bigger and thicker clouds, so if you’re looking to chase some vape clouds, make sure to use a VG liquid. You can also use a blend as they are more popular, just make sure it’s a VG-dominant one. 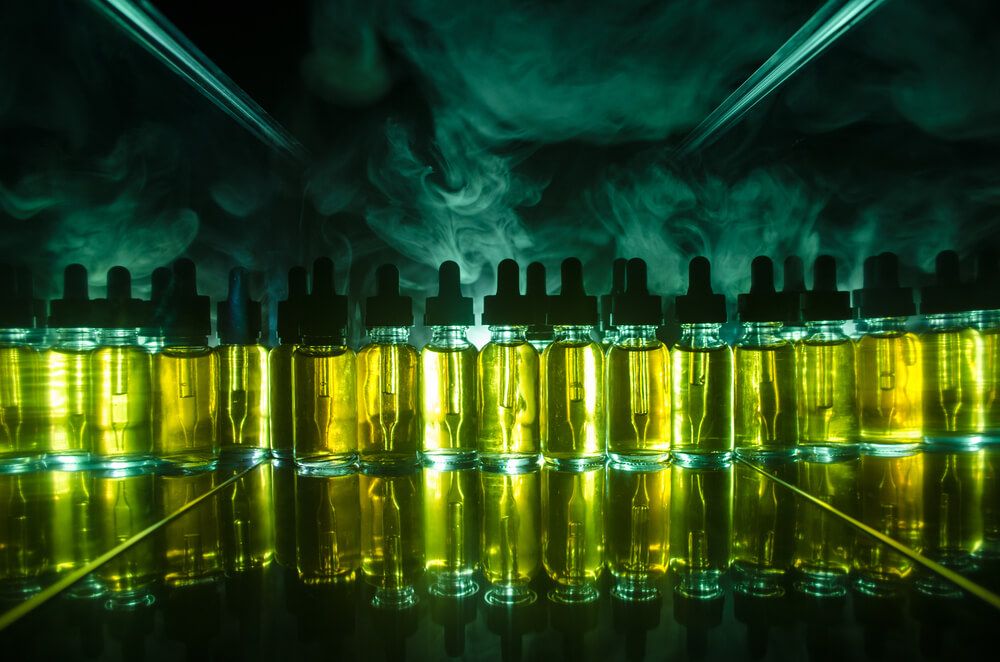 Picking the right device can be slightly subjective because it will depend on whether you are a novice or a seasoned cloud chaser. Most people recommend starting out with sub-ohm tanks, but if you’re really serious about chasing those thick clouds, you should definitely opt for a RDA.

Paired with the right mod

There are mechanical mods out there that offer more raw power than others, so make sure to look out for those. However, if you’re a total novice, stick to regulated mods.

A proper wick is an absorbent material with just the right thickness to carry the e-liquid and air to the coils. The quality of this material will directly influence the quality of the clouds you’re getting from your device.

Coil builds can vary, but for cloud producing setups, we always recommend a low resistance coil build. There are different methods you can explore. From the more simple single coil RDA builds to more complex parallel and dual coil builds.

Lung capacity definitely plays a huge part in the number of clouds you can produce. Lung capacity is affected by your age, physical activity, gender, and genetics. Aside from your innate abilities, proper technique plays a vital role in chucking clouds. Practicing the right body posture, inhaling, and exhaling methods will do wonders for the size of your clouds.

Getting Your Technique Down

Okay, so aside from tinkering with your vaping device, technique plays a crucial role in producing stunning and juicy clouds. Here’s what you need to practice:

The first step is to completely get rid of any air you have in your lungs. This is done by exhaling and slightly leaning forward so that you allow your diaphragm to rise up. Once you get rid of the last bit of air, it’s time for step two.

Start up your device and inhale as hard as you can. Make sure to change your body posture as you take in the vapor so that you increase the amount of smoke coming in. Inhale from the core using your diaphragm and straighten your back up. Moving your body as described will give you extra momentum and thicker clouds.

Exhale at a steady pace

Having a constant pace as you exhale the vapor smoke is crucial to the size and thickness of your clouds. Exhaling too slow or too fast will either make your clouds too thin or just plain underwhelming.

Push out your lower jaw

With your lower jaw slightly pushed out, you’ll get the most smoke out of your lungs because this jaw position will open up your throat and allow the smoke to escape more easily.

Finish off your thick and juicy cloud by giving it a push. This is done by using the last bit of your breath and shooting it directly into your cloud. The push won’t affect the density but will give you some extra distance, and that’s important if you’re looking to compete.

As we mentioned before, these days, cloud chasing has become somewhat of a sport and has a substantial following in the vaping culture. Regular competitions are held all over the globe, and many vapors come together to compare who can produce the thickest and juiciest plume of them all.

While cloud chasing, in general, is a fun and safe activity, there are some dangers associated with it. In order to produce stunning clouds, you’ll need to use a modified device, which in turn means these devices overheat faster than stock ones. The higher amounts of heat produced can cause all kinds of trouble and can even cause an unexpected explosion due to the temperature affecting the batteries.

Always be cautious when cloud chasing and always use the safest batteries you can get your hands on.

And there you have it, our ultimate guide to vaping cloud chasing devices and cloud chasing in general. We hope you start producing those juicy thick vapor plumes as soon as possible and maybe even start competing in a professional competition. For more vape-related news, read some of our other blogs or visit our vape shop in Ft Lauderdale.