Those new to the vaping scene will probably pick up a basic e-cigarette model to figure out if they like vaping or not. It is very common for beginners to start out with simple, low power models that lack more sophisticated options but serve as an excellent introduction to the world of vaping. Those who stick to their new smoking activity will quickly want to switch to vape mods due to the power, versatility, and additional features that come with these devices. However, there is a wide variety of mods available on the market, and they differ both in performance and price.

Today we’re going to share some of the most extravagant and most expensive vape mods on the market right now. The items featured here are going for insane amounts of money, yet they are among the most sought-after and admired pieces of vape gear. That being said, only a handful of people can actually afford them, but that doesn’t stop us from drooling over their looks and admiring their specs.

Here are some of the most expensive vaping devices in the world:

Gepetto is a staple name in the vape industry, being one of the first companies to start mass-producing specialized and custom made mods. They positioned themselves at the high-end of the market from the get-go, continuously producing exceptional and reliable devices. The V2 Elite is 110m tall, with 25mm width, and 35mm depth. The mod is equipped with a special firing switch that’s in reach of both your index finger and thumb. It has a brass connector that fits a 22,5mm atomizer.

The Gepetto mods are all about the exotic wood they are made of and the uniqueness of every model. Every model is handcrafted and has different grains and markings, making no two models alike. The device comes in a hand-made wooden crate that also includes a certificate of authenticity and the name of the wood it’s made of.

Moving up on our list of most expensive electronic cigarette and vape mods, we have a very unique model designed by Otto Carter. The signature aesthetic of the acclaimed engraver is evident throughout the design of this very unique mod. In fact, the device resembles something you’ll expect to see in a parallel steampunk universe rather than something you would use for vaping.

By combining the best in craftsmanship, technology, creativity, and performance, the Otto Carter vape mod is genuinely one of a kind, but it doesn’t come cheap. The mod is priced at $3,000, putting it out of reach for most of us vape enthusiasts.

Top Hat is a unique brand in the sense that they offer both affordable and high-end models to their customers. Since this is a list containing the most lavish devices in the vaping world, we’re looking at their most expensive vape mod called the TI 26650 limited edition.

Take a titanium frame and combine it with carefully selected exotic wood and then assemble it together in a manual, labor-intensive, and time-consuming process, and what you get is a one-of-a-kind device that excels both in looks and performance. The specs include an SXJ v2 chip and a custom-made firing switch, but you’re not getting a TI 26650 because of its technical specs.

Elegant, sophisticated, and compact, the TI 26650 truly is a unique mod, however, it comes with a $10,000 price tag attached to it, so make sure you have your savings ready.

It might sound silly or even crazy to spend this amount of money on a device that allows you to enjoy your favorite smoking activity, but to a select few, it’s the only way to vape! Believe it or not, this $109,000 vaping piece of art was made by a 3D printer. Yes, we are used to hearing 3D printers creating some unbelievable stuff while driving the costs down, but that’s not the case here.

So what makes this particular model so expensive? Well, it’s literally made of gold. The casing is entirely printed out of gold, so it definitely places high in the bling-bling department. Actually, it’s the second priciest vape out there, right after the next model on our list. 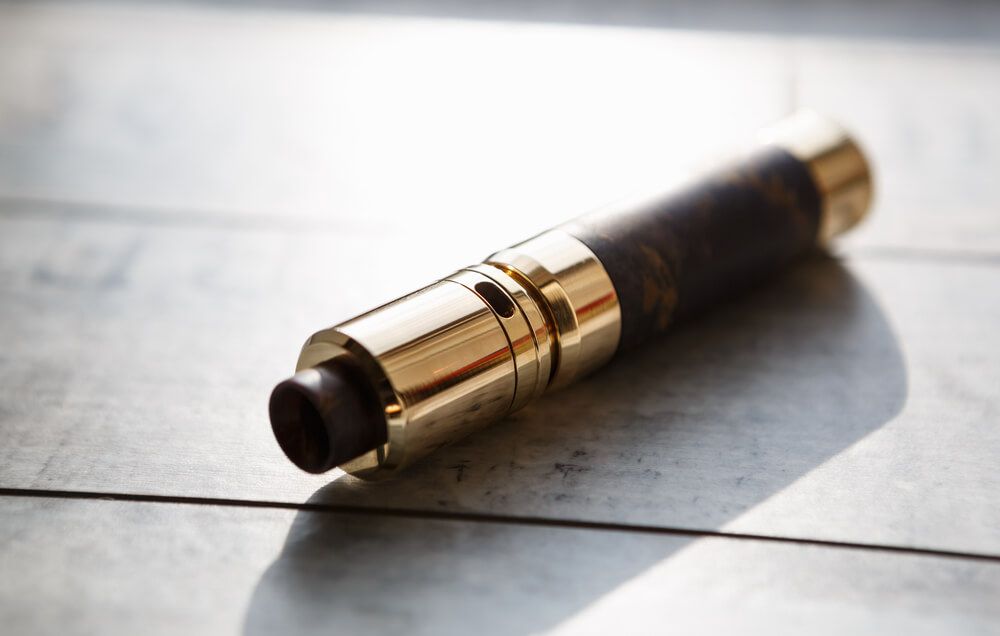 Finally, we have the cream of the crop, the number one and by far the priciest vaping device on our list, and, consequently, in the world. This jewel is definitely one of its kind as it was a special order made by a Russian oligarch who wanted to give his girlfriend a gift like no other. The custom mod was made by Shisha Sticks, and the total cost of the project was estimated to be around $887,000. Now that’s a whopping amount of cash to spend on a vaping mod, but hey, who are we to judge? The oil tycoon specifically said that money was not an issue and asked for the finest components available.

Shisha Sticks took it to themselves to source the finest diamonds, crystals, and glass available in order to craft this extravagant vaping pen. The device is called “Sofia,” which we believe to be the name of the lucky girlfriend that received the mod as a gift in order to quit smoking conventional cigarettes. The highlight of this e-smoking device is also the most expensive part of it. The tip is adorned with a six-carat oval diamond, however, we’re not sure what is the exact value of it. Some sources report the diamond is worth a whopping $60,000, while others claim it’s even more.

That concludes our list of wildly expensive and extravagant vaping mods. If you enjoyed this article, make sure to check out our blog, where we regularly post interesting news related to the smoking community. Also, if you are a vaping enthusiast that wants to upgrade his gear, we will be more than happy to help you out. You can find our smoke shop in Fort Lauderdale, Florida, or by contacting us via our website.